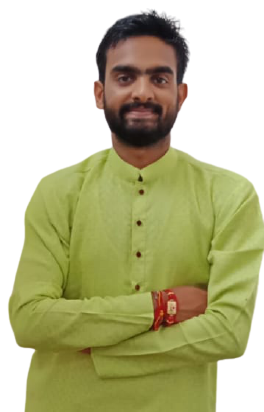 Neeraj Medharthi is Founder & Director of Vedamrita Care Pvt. Ltd. He is a PhD scholar in Central University of Haryana, who has done the world's first empirical research on “Effect of Panchagavya Diet on human Population”. He is Inventor of Vedic Meditation and Yogay Therapy.

Neeraj Medharthi formed the foundation in 2014 in Mahendergarh district of Haryana (India). The Head quarter of the organisation is in Barwala city of Hissar (Haryana). The basic thought behind the establishment of the organisation was to eliminate the evils and challanges that are spreading rapidly in the world. Children with quality and cultured education, harmful chemical-free food to society, conservation and promotion of indigenous cows, Increasing the income of farmers and provide a better health to the people of the world through Yoga, Ayurveda and Panchagavya diet is the primary focus of his Organisation.

He is an International yoga teacher, who has organized many international workshop on Yoga and Aayurveda, Specially on Panchagavya Diet.He has inspired participants from countries like America, Mexico, Australia, Itali and many more to lead healthy life.

So far, he has done almost thousands of programs in india, which mainly included Scientific Gou-katha, Evidence Based Yoga Therapy camps and Natural products training workshops. He is also an avid speaker with his great skills in Music Therapy.

Neeraj Medharthi played a very important role in taking the science of Yoga, Indian cow (Bos-Indicus) and Yagya/Hawan to the society. He is awakening the society on the subjects of Vedic education, Employment by Swadeshi products and the lifestyle modifications for the last decade.